Far from being neutral, the setting Daphne du Maurier describes definitely seems to be out of this world. An overwhelming impression of eeriness pervades the novel transforming the Cornish landscape into a land of fear and instability. By darkening the landscape and stressing its shadows, by emphasizing the general instability of the weather and endowing objects with human characteristics, Daphne du Maurier stresses the dramatic aspect of the landscape. Plunged into a hostile world she doesn’t yet know, but is to discover in the course of her expeditions in the moorland, Mary experiences the menacing pressure of the threatening scenery which gradually envelops her. The striking and radical change in the scenery is first introduced to the reader through Mary’s childhood memory of the "green hills (7)", "the tall protecting trees" (32) and the "gentle rain that fell at Helford (7)" during her coach journey to Jamaica Inn. As soon as Mary wakes up from her daydream, the coach itself "[holds] a tone of menace (15)" and the scenery suddenly becomes the roof of those "born twisted" with "evil thoughts" (15). This traumatic entrance into the world of evil deepens as Mary ventures into the very heart of the bleak universe. Its opressive atmosphere becomes a reality thanks to its systematic personification and the use of similes.

Thus, the coach "rock[s] between the high wheels like a drunken man (1)", utters "creaks and growns" (15) ; the wind doesn’t blow but shouts, cries, and moans (38), "[shudders] like a man in pain (38)", and a cloud even appears as "a highwayman’ s cloak (32)". The fiendish moor reveals its "changing shadows" and its "frowning crags of granite"(83) that "frustrat[e] [Mary]" and almost follow in her footsteps. It seems it is the very contradiction between this country apparently "untouched by human hand" (15) and its underlying human aspect which heightens the threat. The tors seem to alter to take on a human dimension, as clearly expressed in this striking passage :

"Some were shaped like giant furniture, with monstruous chairs and twisted tables ; and sometimes the smaller crumbling stones lay on the summit of the hill like a giant himself, his huge, recumbent fom darkening the heather and the coarse tufted grass."(37)

Such a scene conveys a nightmare impression which serves to deepen the vulnerability of the main character. Indeed, Mary is racked by anguish and devastated by this claustrophobic atmosphere which is further deepened by the author’s manipulation of luminosity.

The scenery becomes a black universe in which everything seems to be subjected to a baleful influence and distorted by the forces of evil. "The black sky" (15), the "brown and sodden moorland" (32) the "black hills", at times "purple, ink stained" and "mottled" (32) "the dead black heather" (84) exerts a morbid fascination in this "grim and rather hateful world" (48). Oppressive though they are, the dull shades don’t triumph over the bright colours, darkness doesn’t engulf brightness. Rather, the bright colours struggle against and resist the threatening power of the sinister colours. First, "a feeble ray of sun"(32) breaks through the thick sky, then the "cold" and "grey" (99) weather finally gives way to sunlight (99), the candles in Jamaica Inn are flickering (19) but don’t go out, "the low turf fire" doesn’t die down, the colours of Launceston carry gaiety to the streets (131) and the lantern is so bright that it blinds Mary : "The light shone in her eyes, and she could see nothing" (17). This endless struggle between elements conveys a feeling of instability, which is reinforced in the same way by the changing weather. As Mary notices, "The scene was never once the same (32)". The elements have a constantly changing aspect in the novel. Thus, the pitiless rain (140) and the "nagging wind" (6) can transform into a "soft wind" gently blowing or even "singing" (73) above a broak which "burble[s] merrily over the stones" and increase again in violence to become a gust of wind, "in an instant" (137). 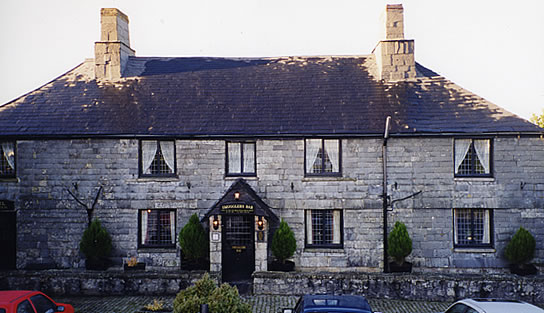 The dichotomy between light and darkness and the constant instability of the weather deepen the effect of uneasiness and fear linked with the suppression of any reliable, stable landrnark. The landmarks which previously linked the fiction with some aspects of reality (existing places and names) gradually vanish with the emergence of this fanciful landscape. And the vocabulary used illustrates the author’s intention to create a very special atmosphere, as she avoids commonplace descriptions. Indeed Daphne du Maurier doesn’t seem to use this vocabulary for the meaning it conveys but uses words such as "darkness", "mist", "frowning", "dead- black", "threatened", "treacherous", "unknown" (84-85) to create the sublime. The sublime implies a mood, stresses the affective power of the landscape which stimulates the reader’s emotions. The feeling of strangeness is conveyed by this specific vocabulary which in fact, does not focus the reader’s attention on the objects ("crags", "heather", "tor", "ground"…) but on the mood that emanates from them. It is, then, the very "splendour" (85) of the scenery, whatever its terrifying aspects that inspires a feeling of awe :

" [ … ] The ground was boggy and treacherous and the well itself of an unknown depth. She bore to her left to avoid it, but by the time she had reached the level of the plain below, with Brown Willy safely descended and lifting his mighty head in lonely splendour behind her, the mist and the darkness had settled on the moors and all sense of direction was lost to her." (85)

Such descriptions allow readers to create Mary’s emotions for themselves, because by the time the main character’s feeling is clearly expressed, the reader has already experienced the same "growing sense of panic" (85). The real scenery has been transformed into a subjective fantasy and it is the reader’s perception which reduces the gap between the subjectivity of this fantasy and the objective world of the novel, for the internal experience comes to the fore. The emotional and psychological involvement of the reader is achieved by means of a depiction of the setting. Moreover, like Mary, the reader obviously experiences the same sense of being lost, feels confused and perturbed by the general instability. However, the overwhelming confusion experienced by the reader is not only linked to the rather fantastic scenery, it is also deepened as the author insists on weakening the boundary between fancy and fictional reality in the main character’s mind.

Fancy systematically emerges in Mary’s mind, transforming the objective world of the novel into a "ridiculous and highly coloured story", into a story invented by "an over stimulated mind", into a story which is "too much of a fairy-tale" (92). ln fact, this "story" corresponds to the subjective nature of a dream. As Mary is

plunged repeatedly into a semi-conscious state, her perception of what surrounds her is distorted, like the faces of men which become "shapeless and distorted, all hair and teeth, much too large for their bodies"(42).

As a result, Mary offers a new perception of things, reality is viewed from a different angle, and consequently, the very concept of reality is changed. There are many examples of these nightmarish and almost unreal scenes which keep confusing the reader. Witnessing the main character’s perception of surroundings and facts, the reader is definitely invited to wonder whether what is seen through Mary’s eyes is or is not the fruit of her fancy. But for all that, does the story lack reality ? Does the reader loose trust in Mary ? ln fact, the reader’s involvement is always maintained because the balance between subjectivity and objectivity, always threatened, never completely crumbles. This balance is for example restored thanks to the chronological minuteness of the novel. The reader is given very exact details about time and space which restore an impression of settled reality. Although Mary sometimes looses "count of time and space" (16, 159), information such as, "Mary woke to the sound of the clock striking two" (71), "It was half past eight" (246), "this afternoon" (90), "it was a nightmare journey of two hours" (158), "Tomorrow is Sunday" (183), give to the tale an impression of very similitude realism. Mary’s physical appearance also strongly contrasts with the fantastical aspect of her surroundings. Her "thick skirt and coloured apron", her "heavy shoes" (30) tend to distance the character from the almost unrealistic world in which she evolves. Finally, the author’s manipulation of Mary’s senses, which are omnipresent throughout the novel, seems to make the character more human. Indeed, Mary constantly feels, hears, observes, smells, thinks, shivers because the exploration of this unknown world always hightens her senses. The insistence on the role played by Mary’s senses tends to humanize the character and makes the reader’s identification with Mary easier. However, the main character, like all the elements in the novel, is also victim of instability. This time, it is the very frailty of the character’s vital functions wich perpetuates the sense of instability. In fact, Mary’s vital functions are perpetually jeopardized by the instability of her environment. Aggressive lights and noises are suddenly replaced by unexpected darkness, by "the deadly quietude" (160) and by frightening shadows which disturb the character’s perception of things. Her senses are put to the test and, all of a sudden, she loses her sight ("The light shone in her eyes, and she could see nothing" (17), she fails to hear ("If she could have heard some sound of them, the waiting in the empty carriage would have been more bearable" (160)), she even looses all sensation as she faints ("She must have fainted quite away for a minute or two" (52)). As a result, the very fragility of the character and the instability of the atmosphere are both fascinating and disconcerting. Boundaries inevitably becomes the key word of the novel. The boundaries between reality and fiction have been blurred but these are not the only boundaries essentiel to the novel. In fact, there are all kinds of boundaries ; boundaries between night and day, stormy and fine weather, life and death, reality and fancy, inside and outside, fascination and fear, and boundaries of the self at the heart of Jamaica Inn. Indeed, the reader has every right to wonder if the omnipresent instability in the novel may not be closely related to the main character’s confused inner life.

Thus, without warning, the reader has left the superficial approach to the text as a story of adventure, to investigate a deeper level of reading if we consider, like Eugenia C. Delamotte, that "[b]oundaries and barriers, after all, are the very stage properties of Gothic romance" [1].